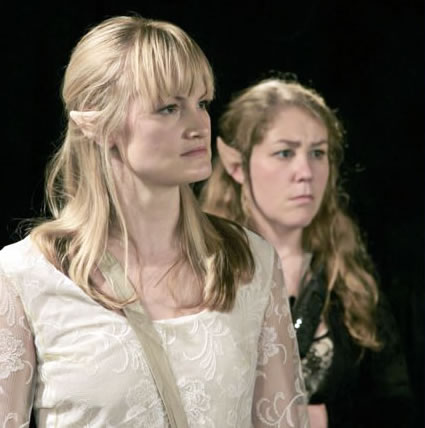 This review nicely sums up the piece, it is included in full...

Let me warn you now. I laughed out loud while watching this play - a lot. Director Stella Duffy squeezes out fantastic performances from her small cast of London's Shaky Isles performers. The plot is simple. Meet Karl, a not so young bit-part actor from the Lord of the Rings films. He arrives in Croydon for his first Rings festival and gets caught up in a struggle between the festival’s promoters and the fans. And that is pretty much it. Apart from the Elves, of course… and the suicide, a secret diary, love triangles, swords and… semaphore.

If you’re a New Zealander, then you probably know Karl. I’m fairly certain that I worked with him in Henderson once. Thirty years old and still catching the surf at Piha, and so laid back that people mistake him for a door mat. Aaron Buskin channels the engaging Karl to perfection.

Festival professional Martin Lovegate is the not-quite-a-star who heads the Lord of the Rings festival billing. A somewhat jaded character, ably played by Kane Bixley, Martin is more than he appears, yet remains a mystery to himself.

Leading the fans is Jessica, a call centre team leader and Martin’s stalker. No friends, no life outside of the Rings and a belief that she really is an Elf, Eleanor Lawrence’ performance breathes both grandeur and a sense of the pathetic into the role.

Then think of the worst kind of festival promoter. Someone who can only see money and will do anything to get it – a rip-off merchant. After unsuccessfully defending Daddy from an embezzlement charge, stone-cold Samantha Brookwhite takes up the festival’s reins. Granted, she has some real problems to overcome: hundreds of protesting wizards, a dead body and Moldovan mafia who want to call in a loan or chop Samantha’s fingers off. Emma Deakin delivers an uber-bitch to hiss at from the comfort of your theatre seat.

For me, the heart of My Inner Orc is Allie, played by Emma Newborn. Allie is the long-suffering right hand to Elven wannabe Jessica. A true fan, Allie does all the dirty work that fan groups necessitate and all she wants is a little recognition for her creative writing. Never has Elven erotica sounded so… painful, and if what they say about Halflings is true then poor Legolas must be wincing.

My Inner Orc cheerfully romps through a quirky story about strength in adversity, faith in the ones we love and doing the right thing. There are barbs to some of the lines, particularly when Deakin punctures the New Zealand psyche with a stinging tirade on the All Blacks, but for the most part, cast and audience just get to have fun.

This show deserves a packed house each night, so whether you like to support Kiwi-made, London theatre or just want a decent laugh, make sure you head to the Pleasance in Islington before 24 October.