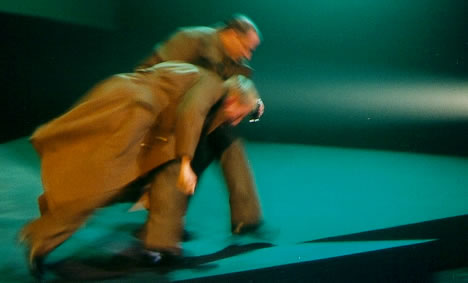 Fond Love & Kisses
The trouble starts when they come home
They left as boys and came back old before their time, but did the society they were fighting for care?  Of the 5000 men who returned from the African campaign on furlough in 1943 only 800 went back. 700 faced court martial and were discharged for desertion. A play based on the true story of The Furlough Incident, an episode that went to the heart of NZ's place in the world, and a returning soldier's place in a country that had seen nothing of the war itself.
Downstage theatre, Wellington
‍
Director - Murray Lynch.
Dramaturg - Philippa Campbell
With: Kelson Henderson, Danielle Mason, Mick Rose, Danielle Mason, Jo Smith,

"Bravo to Allen O’Leary for telling a bitter truth about wartime New Zealand, and doing so with such insight and compassion." - Sunday Star Times

"Fond Love and Kisses is a multi-faceted drama that comprehensively takes its central characters through confrontation, crisis and catharsis... a consummate work of theatre art that demands you ask questions of it. And the more you think the answers through, the more it rewards you.... Anyone who has grown up in New Zealand will have someone in the family or a neighbour, teacher or colleague who was directly affected by what the play covers. Both times I saw it, the audience was riveted, appreciative and still engaged beyond its short two-hour running time." - National Business Review

Full credit must go to O’Leary for his well researched play, which encompasses divergent locations of ‘war is hell’ on the front lines and the difficult domestic environment which the soldiers encountered... Absorbing and honest throughout, this was a play of soaring emotions." - Capital Times