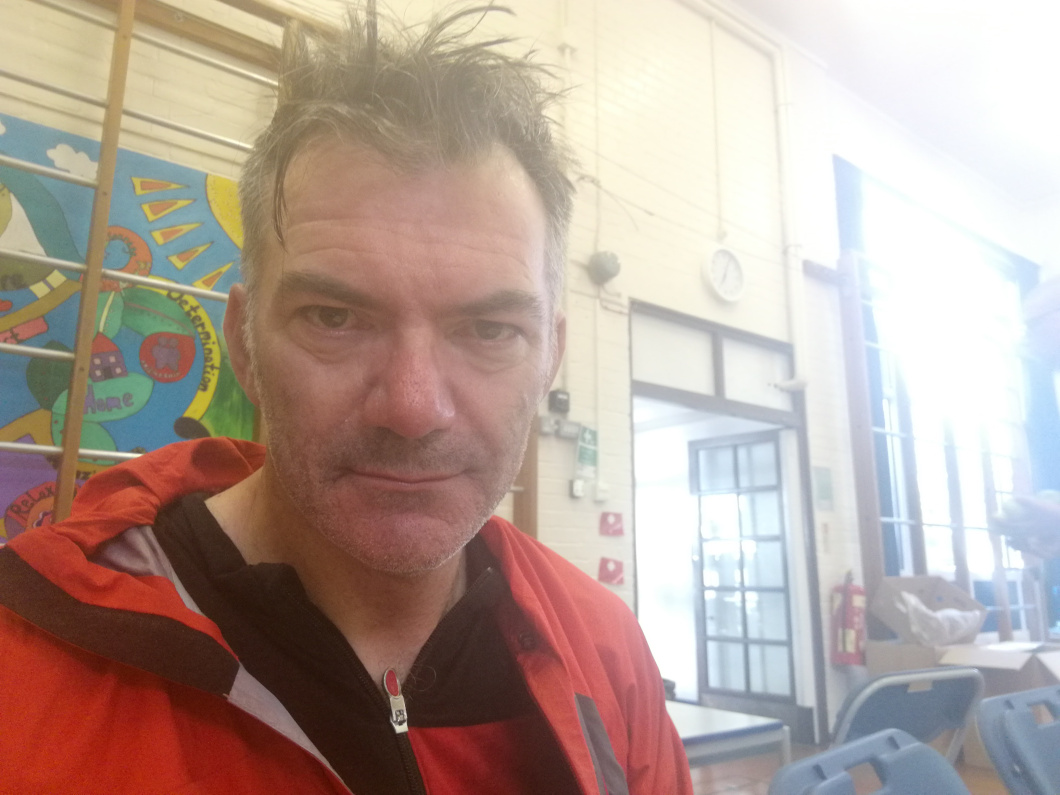 Two weeks to go and I am ready. Anymore tinkering with the bike is just going to undo old learning. I have the miles in the bank – never enough but better than any previous year. Training at this point is pointless, I am just doing short rides to keep limber without getting tired.

Nervous, excited, I just want to get on with it. I am pretty sure I can do this. Sure but not certain. If I was certain would I bother?

Great Easton. Everyone around me looks like sh*t. They are slumped over tables, all the casual chat and bluster shredded and rinsed out of them. Husks of humanity, voluntary refugees, seekers of difficulty. Surely they are not healthy? What drives these mad people on such an arbitrary mission? It’s a version of that feeling I sometimes get on the Tube in London – why does everyone do this? Don’t they know it’s barking?

I take a selfie and look at it. I look like sh*t too. Yes everyone doing this event is mad in one way or another, but pointing at mad people doesn’t make you sane.

My legs keep going despite me, willed on by some dark desire to prove something. Back in racing days we called this called ‘form’, that feeling that your body could just keep going and going until the end of time. Right now I have gone beyond the end of time and it’s not form. I am calling it dissociative leg disorder. They seem to belong to someone else, a better cyclist perhaps. Maybe I have disconnected from my knees because a true appreciation of their actual state will startle me. Those final, winching climbs into Louth just hurt. Just as well those legs are not mine then.

On one of these hills I pass two riders who bear single-letter plates. One of them is talking the other along, as if her words could become a solid tether. The other has taped knees and is looking out of time, and beyond time. Every turn of the cranks is visible agony to her. Knowing a little of what the fens will be like I am sure she won’t be finishing. They are young and keen and doomed, and nothing I can do or say can change it.

I am MM, the last group on the road. If I catch you up this late on the ride you are way out of time.

I am the sword of Damocles. I pity those I pass but also relish the moment, it puts me one up the leader board. It doesn’t matter that I am very near the bottom of that leader board, everyone I pass gives me a small, guilty, boost of confidence.

I am the dirty, gleeful devil in devil take the hindmost. I try not to show it. I give the riders I pass a cheery hello.

Best of British and all that.

It turns out I have trained enough. The only point I feel properly physically done in is on the long tedious headwind climb after the Humber. It’s the only time I pull off and just take a breather for five.

At this point I couldn’t have told you which control I’d come from and which I was heading to. It seems I can either be a person riding or be a person with a memory and an identity. Doing both at the same time is now beyond me. Am I a wave or a particle? I realise I am unravelling and that I need to attend to it. I talk myself back into line – it’s like weaving tatters of thread back into a useful rope.

Pull yourself together. What’s left of it.

Mental tricks. Just don’t think about the distance. Let the wind blow through you, don’t fight it. Only think about the next control. Only have the map on your GPS – no time, no distance. A two hour sleep is more than enough.

The only time I feel uncertain is on the climb back over Yad Moss. I was one of the wave of riders who did it into a rolling wave of wind and water. I was pushing hard while my Garmin told me I was descending. It may have been showing me the geographical truth but it wasn’t showing me anything like the truth of the experience. I rode uphill to the top of Yad Moss and then continued to ride uphill all the way to the bottom.

You think the geography will predict the challenge and the difficulty. Geography is the only thing that’s certain in advance so you plan on it, you model your speed and draw out some rough parameters. But that is just a useful illusion, enough to get you to the start line in a fit state to encounter the other variables of the ride – the weather, the companions, the sleep deprivation.

The geography is immutable but it is not the experience of the ground.

And then later, the wind.

I grew up in wind, in one of the windiest cities in the world, so it doesn’t spook me the way it does some others. Even so, the last 20k into Spalding felt like a very long, very bad joke. Getting sick of watching people’s arses and crawling along I go to the front and batter it out.

Getting frustrated I try to make it happen quicker, to pull time into me and make myself faster through force of will. Not possible.

Let the wind blow through you, don’t fight it. I break my own rule and suffer for it.

Companions. It is 2:30 am, we are at the start of the guided busway and he is having difficulty with reality. I’ve had about 10 hours so far but he was had half that, or less. I can’t imagine what that feels like but I can see the outcome of it, right now.

An evil twin has been brewing inside him and it comes forth with a wild intensity, accusing me of all manner of things. One of the less intense is the accusation that I have let his tyres down in order to make sure he will not finish the ride. I wonder for a moment where he got that from, then I remember that a well meaning mechanic had insisted on pumping my tyres up too hard and I had let some of that extra air out again. I had let air out of my tyres not his.

I am caught half way between pity and revulsion. But I still have some shred of humanity left; we’ve been through too much to get this far so I’m not going to leave him here. I go into calm and collected mode and manage to talk this devil back to the control where he can get some proper sleep. An hour later I head back out by myself.

I am 100% certain that his ride is over so I am astonished to see him ride in just inside the time limit some twelve hours later. Given the state in which I left him it is an extraordinary achievement of will over circumstance.

The body is one thing but the head is another. In PBP I had let the food situation totally psych me out. I didn’t really understand what was happening at the time but afterwards I saw how I had talked myself out of the ride. I a lot of time thinking about my thinking and had come up with ways to deal with those small negative thoughts that can chip away at your confidence. I’d read books on performance, I’d watched TED talks about endurance attitudes, I’d searched academic papers. I was certain there would be dark moments on LEL and I rehearsed ways to deal with them on other rides.

Training can mean many things.

And it was this training that I was most proud of.

On the run into St Ives I am not only tired and slow but in the grip of intense hallucinations. I was riding around and through giant plates of glass. Great hovering sheets of blue, like when you look down into clear water in the Med, but in front of you, waiting for you to puncture them – a cigarette on a balloon. This was well beyond seeing animals in the shadows – that was night two – this was like being inside the Large Hadron Collider. I was a stream of potential states imploding into an unpredictable forms of matter. Sometimes I was a cyclist on a road late at night but sometimes I was pure light and sometimes the sound of a car tore me into pieces of chaff and scattered me into the wind.

It’s only after the event, in reading other people’s stories, that I get a grasp on how ‘normal’ my version is. Each ride is a story, a variation on a theme, but some are extraordinary. The women who has only ridden 200k before and gets ‘the neck’ but somehow manages to finish. The Indian riders who worry about wild animals at night. The guy trying to do the ride quickly whose mouth turns into a raw pulp of flesh after too many sugary hits.

I may have had the devil appear before me on the last night and suffered some rather intense hallucinations, but aside from that my ride was well within the bounds of what a moderately experienced and prepared audaxer should expect. My experience was not very different from that of the many hundreds of middle-aged men chasing a finish and not a time.

The real indication of how far out of the civilised world I have come is on the ride in the car home. Steph, normally a conservative driver, seems to be driving insanely fast and I press myself into the seat, away from the window, flinching every time a car passes. I check the speedo, preparing to tell her to slow down.

You can’t be sure of anything but you must approach the ride with certainty. Fixed and flexible. Determined but sensitive to your body and state of mind.

We know riding LEL is a bit mad but it’s also keeping us sane. Long distance cycling is arbitrary and constructed – there is nothing natural about it. But we use the artifice to place ourselves back in the world and the weather, it’s a pilgrimage of sorts.

We plan in the mind and execute in the body in order to revive the spirit.